News / In the Spotlight

Jackie Stewart is the former Team Leader at Yeaca Dhargo. Jackie recently moved on from this role at Kurbingui to be the Aboriginal Facilitator and Trainer at the Education Centre Against Violence, New South Wales.

Jackie is an Aboriginal woman from the Kongabula tribal group of Southern Queensland. She also runs her own private practice ‘Ancestors Singing’ providing cultural supervision and mentoring as well as creating and delivering cultural training and resources to support cross-cultural understanding for both Aboriginal and non-Aboriginal people. She also trains in generational trauma, cultural mindfulness and lateral violence. Jackie has worked in Aboriginal community and government child protection for 17 years.

Jackie’s deep connection to her Aboriginal culture and the spirits of her Ancestors guide her in work and life. Jackie is committed to naming and supporting healing from the impacts of generational trauma for Aboriginal people in Australia. Colonisation has influenced the lives of Aboriginal people in Australia for 230 years. Official and unofficial social policy effectively controlled every aspect of life for Aboriginal people, including the right to marry, parent and the right to work and earn money. Jackie aims to increase consciousness of the deep wounds caused by social and emotional restrictions, controls and abuses that have dramatically changed Aboriginal lives and culture. 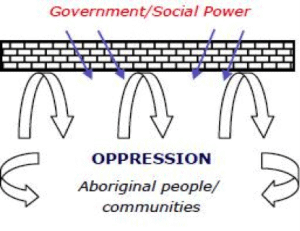 Understanding Lateral Violence in Aboriginal communities and working with Indigenous children, families and communities in the context of domestic and family violence is important for all in the child protection, domestic and family violence and family support sector. In speaking to lateral violence in Aboriginal communities, Jackie explained that the term refers to communities unable to fight back against an oppressor, instead fight each other. “Lateral violence is a term used in Aboriginal communities when community members are fighting within themselves and become divided or fractured” said Jackie. “A direct impact from colonisation and oppression. Government legislation has removed the power from Aboriginal communities and families through the disempowerment they’ve experienced via the Stolen generation, lost wages and other legislations that have caused ongoing oppression. Ultimately Aboriginal people can’t fight back against the power of government so in their frustration, anger and hurt, they start attacking each other.” Jackie notes that from this paradigm it can become a downhill spiral to attacking all forms of accomplishment: “What happens is other community members might get singled out. We too have a ‘tall poppy syndrome’ that is commonly understood in Australia. As such, one member might get further ahead and others will start to use derogatory terms such as ‘flash black’ and segregate them from the community.” There are various forms of lateral violence in communities. These include: bullying, organisational conflict, infighting, sabotage, shaming, scapegoating, self-harm, social exclusion, family/community breakdown, imposition of derogatory labels, verbal and physical violence.

Jackie is clear that these divisive processes occur in all minority groups where hierarchies are present and disempowerment exists. “I just did a talk recently in the LGBTIQ community in Melbourne and it plays out in this community as well, so my analysis was really insightful for this group.”

Interestingly, lateral violence was a term coined in America with regard to a study of the behaviour of nursing staff. Nurses started to display aggressive and divisive behaviours in hospitals. When studied, it was noted that these behaviours were about hierarchy and disempowerment which is why in-fighting began with nursing staff. Following this study, Canada’s First Nations realised this process was similar to what happened in their communities and they adopted the term. Jackie acknowledges that it is similar in Australia for Aboriginal and Torres Strait Islander communities but she makes a slight difference in terminology: “I personally use the term lateral trauma as opposed to lateral violence because the term violence makes it sound like they’re doing something wrong whereas it is a pain based trauma response to the impact of colonisation and the harm inflicted on Aboriginal communities.”

The response to lateral trauma by workers needs compassion as opposed to another negative response to a community already feeling the impact of colonisation. “When I’m working in the domestic and family violence space, I work with the family as the whole unit. I don’t single out the person using violence. Engaging the whole family for change is the way to get everyone on board. You have to be prepared and able to have hard conversations with people when domestic and family violence is involved.”

Whilst the victim of the domestic violence is the client, so too are her family and community. The whole community are clients and are all responding to trauma and acting out this trauma through pain-based behaviours.  Jackie noted that it is important to focus on your client but to see family and community as part of the engagement process, always remaining mindful of the impacts of colonisation. The recognition is that each person comes with history and trauma. So too does the perpetrator. There are layers of complexity that need to be understood and addressed.

Whilst acknowledging that gendered violence is an issue in Aboriginal and Torre Strait Islander communities, the issue is viewed differently to the general understanding in mainstream communities. Although women are more often the victim of violence than men and have a high incidence of hospitalisation, the acting out of violence can be either party: “Because of pain based behaviours in Aboriginal communities, many women are acting out violence. We know it is still more men but there needs to be some sort of clearer focus on what it looks like if the woman is the perpetrator and how we work in that space.”

Another significant factor worthy of consideration is the fear women experience with regard to reporting Aboriginal men who are using violence. “They are really fearful he won’t get help, he’ll be mistreated, or he’ll die in prison. The system isn’t seen as reformative, it’s seen as retaliative. The fear of systems is a 200 plus years of generational fear due to abusive system responses. It’s a blanketed feeling of mistrust of systems, especially governmental.”

“When I’ve worked with people experiencing lateral trauma I’ve worked in a sense of working with the fracture in the community between two sides. If one family is more predominant I’ll talk to that family first, talk to local Elders and find out what support may already be in place for this divide. If it’s within the workplace you may notice some of this behaviour, I support organisations to write lateral violence or trauma policy. This needs to be written in its own policy because it is different to bullying. There needs to be a cultural component to any lateral violence policy even if it generically applies to all marginalised groups. I consistently ask workers to reflect on how these issues impact families, communities and workers and to make sure all are included, not just the Aboriginal workers” said Jackie.

When working with Aboriginal and Torres Strait Islander issues, Jackie asserts that everyone in the workplace should be on the same page. Whether it’s a bullying policy or a lateral violence policy – everyone should be informed, involved and part of the solution in creating a healthy workplace culture together. “It’s not just an Aboriginal and Torres Strait Islander issue, it’s a whole workplace issue.”

Jackie notes that workers going into an Aboriginal or Torres Strait Islander community should be represented by an Aboriginal person, preferably an Elder or Aboriginal or Torres Strait Islander worker. The irony of asking Elders to assist is they’ve been through the years of stolen generations, stolen wages, then we ask them to give more of themselves and work with us for free. Ways of respectfully seeking the assistance required whilst ensuring that their expertise and the hopes and dreams for communities are met without them being taken advantage of are necessary and the responsibility of each organisation and government body.

Thank you to 54 Reasons (Save the Children) who, with the support of the Brisbane City Council have made sure…

Anti-Poverty Week 2022 “Is Australia the lucky country for all?” panel discussion photo gallery

It increasingly seems that few of us are being spared from wearing the face of Winter 2022. Bouts of COVID…