News / In the Spotlight

“Poverty is not caused only by individual circumstances, but also by major inequalities built into the structure of Australian society. Some of the main causes of this inequality and poverty are access to work and income, education, housing, health and community services”. ACOSS, 2011

The recent Women and Poverty Forum co-hosted by Minister Shannon Fentiman and Micah Projects was the topic of our In the Spotlight Article on 19th October. The forum also highlighted key information offered by Deloitte’s Natasha Doherty and Nikki Chenoweth who shared her own story.

Natasha Doherty, Partner and National Lead Partner in Program Evaluation, Health and Social Policy, Deloitte Access economics, delivered the facts and figures around older women and poverty.  She noted the importance of recognising the diversity of women’s experiences. In terms of general facts, women are likely to have $63,000 less than men in their superannuation. 7.9% of older women are in the labour force in comparison to 17.9% of men.  Natasha outlined the facts as follows: 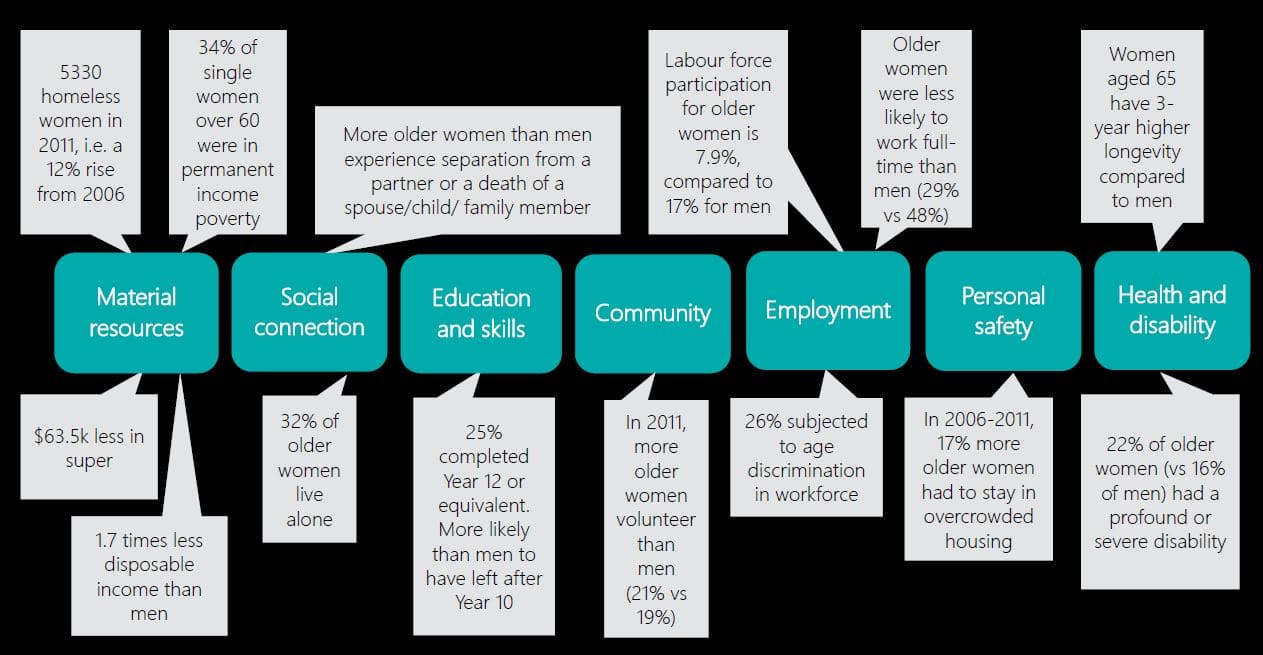 ‘’In a climate of what might be described as ‘taking the foot off the gas’ possibly the most surprising element in this investigation, was that little has changed. For older women, in some areas, their situation is getting worse because persistent gender inequity continues.” Lord Mayor’s Charitable Foundation, 2016

Natasha spoke to 5 key points in the areas of life changes for women that are significant:

Casualisation of the workforce

Ongoing gender inequality in most spheres

Lack of Women’s collaborating organisations and networks and advocacy

Lack of appropriate and alternative superannuation models for women

Poor or insecure or inappropriate housing

Natasha noted that we currently have strategic opportunities and challenges for women in Australia. Amongst those are the longer life expectancy, an increasing population of older women (1.6 million), lower superannuation, higher rates of chronic or persistent poverty (34%) and increased risks of poverty traps as per the points above.

The barriers to social inclusion and wellbeing for older women include: insufficient financial security for their older age, lack of public discourse about age and gender discrimination, housing affordability and lack of public housing stock, balancing family and work responsibilities, the changing nature of families and addressing the persistence and accumulation of inequality and disadvantage.

In order to combat issues for older women, the next steps articulated were the need to undertake further data analysis to investigate the differing experiences of cohorts of women and to do so in light of media activity that reports on gender inequality. The importance of embracing networks, initiatives and lifelong learning for women and women’s networks to engage all in how women can optimise financial security whilst being active in health, wellbeing and policy debates was also highlighted. Innovate for new solutions was Natasha’s final recommendation. Use technology to discuss and develop new ideas to problem solve and connect alongside developing and evaluating enterprise initiatives.

Nikki Chenoweth is a descendant from the Guugu Yimitrir, Nymal Naymal and Kalkadoon Aboriginal language groups.  She is also the Manager of Breakthru.  At the Women and Poverty forum she spoke to poverty that exists behind closed doors.

Nikki noted that she didn’t live in the culture of her language groups because her great grandparents were removed from country.  Instead she lived in a suburban home in Brisbane’s inner north with about 18 family members. Her issue was overcrowding.  “By the time I was 8 years old I began to notice a cycle that Aunties would leave school around Year 9, fall pregnant and then stay on welfare.  I thought that’s where I was headed.  Uncles had their cycle too but when they left school early they went into unskilled labour.  Women were seen to be all about having children”.

“We shared everything between the whole family – clothes, food, and a toothbrush. I thought this was totally normal. There was drug and alcohol issues and domestic violence. Santa only came very 2 years to our house.” Nikki was very clear that hers isn’t a sad story: “It’s a celebration of the acts of kindness and mentoring that led me to where I am today.”

“The first couple who lived in our street, I’ll call the mad scientists. They were European and told me every day about plants and animals.  They shared all sorts of information with me. The first time I was invited into their home, they proudly showed me their loungeroom with glass cabinets with insects pinned inside the cabinets. I looked for the closest exit thinking them very strange!  I now realise they were entomologists. So, they’re talking to me about science and nature and educating me. They’d pop a plate on a little side table with a sandwich and milk and say ‘there you go, afternoon tea.’ So, they gently fed me without making an issue and I wasn’t knocking back fresh milk that wasn’t powdered. As they talked they’d say ‘when you go to university’ and ‘you can do such and such.’ By making these simple but clear statements they suggested possibilities for my life I’d never considered. They helped me know there was so much more out there.”

The other family in the street who assisted Nikki, she referred to as the Family of M. The Mum was an English teacher. “She had a massive impact on my life.  She had a room filled with books. I thought it was like the State Library. She was a mum, a teacher, she had a job and still cooked dinner. As far as I could see – she had it all. They had a bowl of fruit on the dining table. I thought it was fake. The only fruit in my house was fake. When my friend noticed me looking at the bowl, she offered me a piece. I thought she was joking. She assured me it was real. They supported me in small ways like offering fruit without ever harming my dignity. She loaned me books that I could take home and read. When I’d return the book, she quizzed me: ‘Who are the characters?  What was the book about?’ I quietly thought she should read the book herself instead of quizzing me. Then I realised she was increasing my knowledge and ability to learn and understand. The book became, a book borrowed packaged with a toothbrush and piece of fruit.”

Nikki noted that this gentle generosity made a huge difference to her life. What made the most difference was the simple messages imparted: “You can be anything, do anything. You can have a house. I’d never ever considered I’d have a house.”

Today Nikki is an Artist, business owner and the Manager of Breakthru, a national not-for-profit organisation committed to empowering people to create their own futures. They operate on the belief that real and lasting change can happen. Through the provision of high-quality person-centred programs, they enable thousands of people every year to address employment, disability, mental health, homelessness and training needs. Breakthru operates on the premise that everyone’s needs, preferences and aspirations are different. Amongst their many programs, they offer dedicated and culturally considered programs for Aboriginal and Torres Strait Islander people, refugees and culturally and linguistically diverse groups.

In closing the Women and Poverty forum, Honourable Di Farmer, Minister for Child Safety, Women and Youth, paid tribute to the women who shared their personal stories of poverty. She thanked Micah Project’s CEO, Karyn Walsh and acknowledged the significant contribution she and her team make in working with those experiencing poverty and many of the associated issues. She said about women: “We teach each other. And we challenge each other.”

Thank you to 54 Reasons (Save the Children) who, with the support of the Brisbane City Council have made sure…

Anti-Poverty Week 2022 “Is Australia the lucky country for all?” panel discussion photo gallery

It increasingly seems that few of us are being spared from wearing the face of Winter 2022. Bouts of COVID…