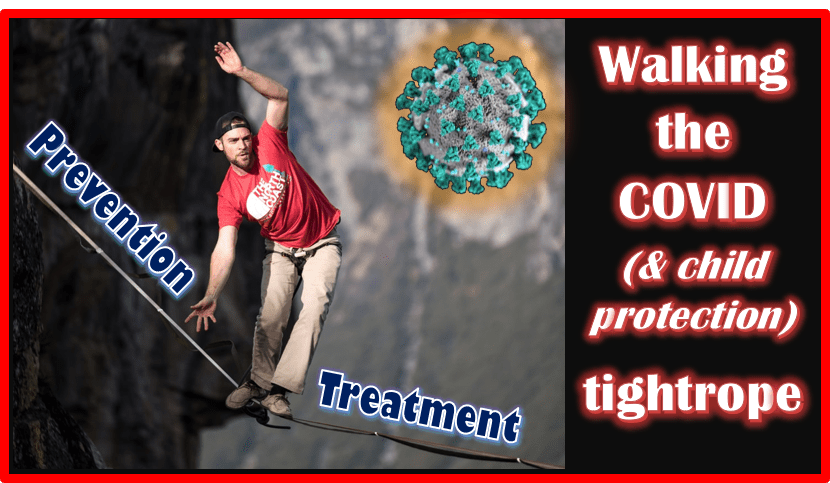 Australian governments having been walking a tightrope balancing their investment in strategies aimed at preventing the spread of COVID-19 with those aimed at ensuring that when outbreaks occur, individuals who contract the illness are quickly identified and treated. While concerns about the second wave that has hit Victoria are enormous, in comparison with other countries, Australian governments have done much better than most in walking the COVID-19 tightrope.

Parallels can be easily drawn between the complexities of managing COVID-19 with those associated with effective management of the child protection system. Both seek to strike the right balance between investing in strategies to prevent harm and those aimed at quickly responding to those who have been harmed and supporting them in their healing and recovery.

Why then have governments been able to keep the COVID-19 tightrope comparatively taut and steady, while allowing the child protection tightrope to incessantly wobble and swing?

In respect of COVID-19, Australian governments quickly moved to adopting strategies aimed at preventing spread of the virus unlike some other overseas governments that moved more slowly and flirted with ‘herd’ approaches. While adding resources to hospitals and health systems to diagnose and treat those who contract the virus, the prevention strategies implemented by Australian governments were also seen to be important in ensuring that these systems would not be overwhelmed by demand as they have been in other parts of the world. In respect of child protection however, despite commitments made via the National Framework for Protecting Australia’s Children endorsed by the Council of Australian Governments (COAG) in 2009, the findings of numerous Inquiries, and  significant investments made in various family support programs by the Queensland Government and others, the vast bulk of child protection funding remains directed towards the tertiary end of the system. Despite promising results being achieved by the Family Wellbeing Services and other family support initiatives, the investment in earlier family support has been insufficient to turn the tide on the demands being placed on the Child Safety Department with the Together Queensland Union and others arguing that statutory service delivery by Child Safety Officers continues to be overwhelmed by caseloads that are too high.

While strategies introduced to prevent the spread of COVID-19 have included an element of coercion and control (such as fines for non-compliance with heath directives), they have overwhelmingly worked best when the community at large has seen the sense in engaging in social distancing, using good hand hygiene and not placing others at risk. This has been assisted by initiatives such as the Care Army and widespread promotional campaigns and public messaging about support available to cope with the impact of restricted access to family and friends – all of which have harnessed and facilitated community collaboration and compassion. Similarly, family support services work best when they are delivered in a non-stigmatising, non-threatening and culturally respectful manner where parents and other family members self-refer and regard the services they are being provided as practical, timely and readily accessible. Currently, access to too many of these services is funneled through encounters with the statutory child protection system when much earlier support is what is needed and more likely to succeed – a case of too little too late. While campaigns such as ‘Talking Families’ have periodically been used to promote help-seeking behaviours and influence public awareness of the needs of families, they have fallen short in instilling and maintaining a shift in the community’s mind-set about the needs of children and their families.

The rapid emergence of COVID-19 has been accompanied by the establishment of the National Cabinet that has usefully served as a mechanism for Federal and State Governments to share information, collaborate and coordinate the exercise of their respective roles and responsibilities. This contrasts with the frequently fragmented policy directions pursued across and between different levels of government in relation to children and families, despite the former COAG agreements reached under the umbrella of the National Framework for Protecting Australia’s Children. We need look no further than the many thousands of children being cared for by largely unsupported grandparents, aunties and uncles, brothers and sisters outside of the statutory child protection system to see the damage done when children and families fall between the cracks of Federal and State Government held responsibilities. If governments are capable of setting aside political differences to coordinate responses to the pandemic, why can they not do the same in responding to the needs of Australia’s children and families?

While the management of COVID-19 has not occurred without its trials, Australian governments have uniformly insisted upon their decision-making being informed and guided by those with medical expertise, especially in regard to infection control and treatment. While conspiracy theorists, anti-vaxers and other ‘arm chair critics’ have being voicing their opposition, governments have not seemed deterred by their opinions, nor have their ill-informed views held sway in mainstream media reporting or in the minds of most community members. Overwhelmingly, respect has been shown to the medical researchers, policy-makers and front-line doctors, nurses and paramedics and while we might not always welcome the news they deliver, we defer to their knowledge, dedication and expertise.

It is in respect to this matter where perhaps the greatest difference lies between ways in which governments have elected to manage COVID-19 and their management of child protection. As a system, child protection has remained vulnerable for far too long to the influence of populist views that make the tightrope tremble and swing. It often seems that anecdotes hold greater sway than research and evidence, and front-line child protection practitioners as a collective seem more likely to be vilified than revered in the court of public opinion.

So what is going wrong? Is it that the voices of bodies such as the Queensland Family and Child Commission, universities, peak bodies and other organisations involved in delivering child protection services are not loud or robust enough to cut through the din created by the arm chair critics? Or is it that the ways in which their messages about sound child protection policy and practice are being delivered are missing the mark in establishing their credibility and instilling public confidence? Or is it simply unpalatable for governments or the community to accept that most families, if faced with the same conditions and circumstances as those being typically dealt with by families who come to the attention of the child protection system, will also struggle to keep their children safe and well?

If we fail to find the answers to these questions, it’s likely that the child protection tightrope will continue to swing wildly. We know from COVID-19 that our governments (both elected and opposing parties) can do much better than allowing this to happen.

If you have a view about how the child protection tightrope can be better managed, enter your comments below – anonymously if you prefer.