Congratulations to the ALP – and stay tuned for more survey reports 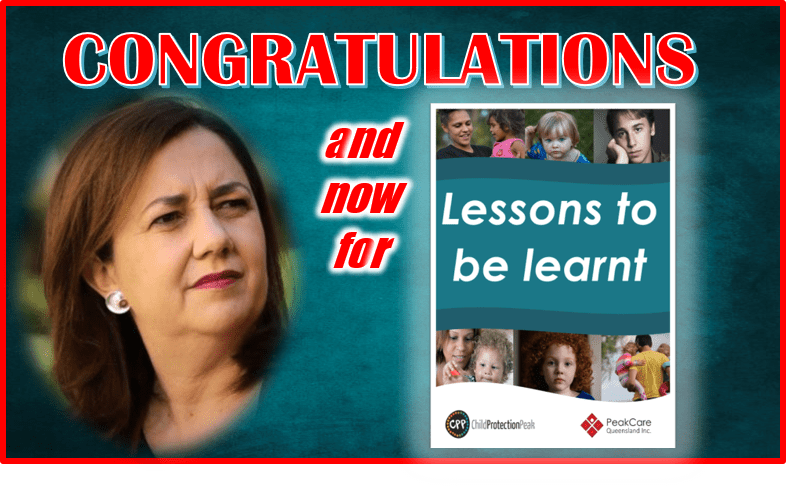 PeakCare congratulates Premier Palaszczuk and the Labor Party on being re-elected to a third term in government. Our best wishes are also sent to the Opposition parties. We are indeed fortunate to live in a democracy where Opposition parties, as well as the party elected to power, play a vital role in ensuring good governance of our State. And that’s what PeakCare is looking forward to over the next four years – good, effective and visionary governance. PeakCare will, of course, be endeavouring to play our role in this process by advising, influencing and advocating for sound child protection policy, wise investment and better futures for Queensland children, young people and families.

Throughout the election campaign, PeakCare and the Queensland Aboriginal and Torres Strait Islander Child Protection Peak (QATSCIPP) have been releasing reports on the findings of our survey about the LNP’s proposals for overhauling the child protection system. While the LNP was not elected to form government, there are still lessons to be learnt by the Palaszczuk Government from the findings of these surveys.

From the time PeakCare and QATSICPP commenced releasing the findings, we noted that it would be a mistake to regard the survey as simply a ‘poll’ about the LNP’s proposals. It is within the commentary provided by the almost 2000 survey respondents that the true value of this exercise can be found. This commentary was not limited to providing an indication of reactions to the LNP’s proposals. The survey findings also provide a commentary on the current state of the child protection system, its strengths and where improvements can be made.

Importantly, commentary by the survey respondents invites us to look beneath and beyond their reactions to the LNP’s proposals and examine the reasons for these reactions. In particular, it is now incumbent upon both the government and non-government sectors to give close consideration to why there were high levels of agreement with some proposals, high levels of disagreement with others, and perhaps most importantly, why there were strongly divided opinions expressed within and/ or across the thirteen stakeholder groups in response to many. If you are like us, you will find some of the commentary included in the survey reports pleasing, and other parts confronting.